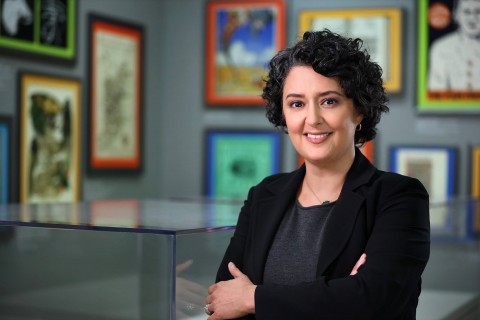 The first few months of 2022 have been a roller coaster. As I write this message, my thoughts are with the people of Ukraine and refugees from around the world. They include those who have arrived at the U.S. southern border and who are fleeing persecution and poverty. Violence, greed, and various forms of social exclusion must be addressed abroad and here in the USA.

As always, the work continues here at the CSRC, and it brings me hope. This January we launched the California Freedom Summer Participatory Action Project. Implemented in collaboration with the other three UCLA ethnic studies research centers, faculty at other UCs, and community college partners, the program will train over one hundred students to conduct non-partisan voter education, grassroots organizing, and research that supports youth voices in the democratic processes. The students involved in California Freedom Summer come from communities that have been deeply impacted by broken immigration systems, the COVID-19 pandemic, and racial injustices. Yet these students are full of dreams and energy, and they are determined to help their communities thrive. The goal of the program is to place these students in paid internships in their home communities so that they can enhance the democratic participation of their peers and increase research-based understanding of this diverse group of young Californians.
Our ability to engage in such an ambitious statewide project has been bolstered by the appointment of Eder Gaona-Macedo as the CSRC’s senior officer of community-engaged research. An alum of UCLA’s Chicana/o studies and political science departments, Eder brings to the position a wealth of experience in applying research to advance immigrant rights, racial justice, and education equity. I am glad he has joined us, as the CSRC plans new initiatives to develop ethnic studies coursework for high school students and related teacher training, as well as other research projects that prioritize the well-being and success of California’s majority Latinx youth population. Read more about Eder here.
In other major developments, the CSRC’s Faculty Advisory Committee has been busy implementing key aspects of the Chancellor's HSI Infrastructure Initiative, an effort to prepare for UCLA’s designation as a Hispanic Serving Institution. To qualify for HSI, a college or university’s full-time undergraduate enrollment must include at least 25 percent of students who are of Latinx origin. Thanks to these historic investments, the CSRC will announce plans for faculty hires, postdoctoral appointments, and research funding awards in the months to come.

I am grateful to Chon Noriega and Charlene Villaseñor Black for their ongoing work with the CSRC. Chon is planning the next phase of the A Ver: Revisioning Art History project, which will include major contributions from assistant professor Karina Alma, who will spotlight Central American artists. Charlene’s new and revelatory edited volume, The Artist as Eyewitness: Antonio Bernal Papers, 1884-2019, is now available for purchase, along with our beautiful A Ver monographs, through CSRC Press and its distributors.

I am looking forward to connecting with many of you as the CSRC continues programming and research that seeks to make a difference in the greater Los Angeles region, California, and beyond. You can read additional announcements and more about developments at the CSRC in our detailed newsletter here.

Latinx Studies Seed (LSS) Grants Program
As part of the UCLA HSI Infrastructure Initiative, the CSRC in collaboration with the Office of Research and Creative Activities (ORCA) is pleased to announce a call for proposals for the Latinx Studies Seed (LSS) Grants Program. These LSS Grants are designed to help launch and support research projects related to topics relevant to Latinx populations in the United States, including (but not limited to) comparative studies that attend to forces that shape the experiences of Latinx groups (including those of Mexican, Central American, Caribbean, and South American origin) and other historically marginalized populations. As such, proposals funded by this grant program may also have implications for Black, Indigenous, Asian American, Pacific Islander, immigrant, and refugee communities. This funding competition is open to scholars of any discipline. The PI must hold UCLA academic faculty or academic administrator appointments as of 7/1/2022 (individuals in the senate, lecturer, adjunct, other non-senate, and academic administrator series are all eligible). Visiting faculty, postdoctoral fellows, and individuals without UCLA appointments are not eligible to serve as the PI, although they may serve as co-PIs or team members. For more information visit: https://www3.research.ucla.edu/reo/internalfunding/lss

Flores provides library instruction
On March 1, CSRC librarian Xaviera Flores provided research instruction to 490 students enrolled in CCAS 10B, “Introductions to Chicana/Chicano Studies: Social Structures and Contemporary Conditions,” taught by Chris Zepeda-Millán, associate professor of public policy and Chicana/o and Central American studies. The class lectures that week focused on archival research and uncovering the power and politics of those whose stories get told.
El Nopal Press Records addition received
CSRC has received additional materials for the El Nopal Press Records. The contents of one box were donated by El Nopal founder and master printmaker Francesco X. Siqueiros. The materials are a complement to Siqueiros’s personal papers, which are also archived at the CSRC, and they include correspondence and business files related to the administration and activities of the press.
Exhibitions with CSRC loans
The following exhibitions currently on view include images and artworks from CSRC collections and publications.
GIrlhood: It's Complicated
Smithsonian National Museum of American History, Washington, DC
Corky Gonzales: Always Fighting
Google Arts and Culture
Patriotism in Conflict: Fighting for Country and Comunidad
LA Plaza de Cultura y Artes, Los Angeles, CA, through June 19, 2022
Raphael Montañez Ortiz: A Contextual Retrospective
El Museo del Barrio, New York, NY, April 14–September 11, 2022
For more information about the library and its services, email librarian@chicano.ucla.edu. Researchers may visit our research guide at https://guides.library.ucla.edu/csrc/. UCLA students may also seek reference assistance on the UCLA Slack Channel using #csrc-library-reference-help.

New release! The Artist as Eyewitness: Antonio Bernal Papers, 1884-2019
Antonio Bernal is often identified as a muralist—his 1968 mural in Del Rey, California, has been cited as the first Chicano mural—yet his career has been wide-ranging. He has been a union organizer and an iconoclastic educator; an actor and author; and an artist of paintings and collage as well as murals. All have been shaped by his unwavering political viewpoint and commitment to truth telling. The Artist as Eyewitness is the first survey of Bernal’s life and work. Edited by Charlene Villaseñor Black, the book contains essays that discuss his career, his two murals, and his novel, Breaking the Silence, and it features nearly eighty illustrations, including eight color plates. Research for the book was supported by the Antonio Bernal Papers, a special collection at the CSRC. The Artist as Eyewitness, volume 8 in the CSRC’s Chicano Archives series, may be ordered from University of Washington Press, the CSRC’s distributor for this series.
New on CSRC Post: “Josefa Serna’s Spiritual Collection”
In the latest contribution to the CSRC’s blog, CSRC Post, Nicole Ucedo, CSRC research and archive assistant, writes about her discoveries while processing the Josefa L. Serna Papers. The collection is part of the CSRC's NEH-funded project “Religion, Spirituality, and Faith in Mexican American Social History, 1940s–Present.” The collection reflects Serna’s connection to her religion and includes church documents, photographs, and devotional objects. Ucedo notes that “the objects in the Serna collection provide not only a deeply personal portrayal of one woman’s life but also insights into the lives of many Chicanxs living in Eastside neighborhoods in the 1930s through the turn of the century.”

CSRC IN THE NEWS

All “In the News” articles are available in PDF format on the CSRC website.
“Health Services Researcher Valdez to Lead AHRQ”
A story in Healthcare Innovation announced Robert "Bob" Otto Valdez, a health services researcher with previous experience at the U.S. Department of Health and Human Services, has been named director of the Agency for Healthcare Research and Quality (AHRQ). From 1985 through 1999, Valdez was a professor of health services at the UCLA School of Public Health and during that period served as associate director of the CSRC.
Healthcare Innovation, February 23, 2022 (PDF)
“Obituary: Longtime Congressman Esteban Torres Dies at 91 after Life Devoted to Public Service”
An obituary for the Hon. Esteban E. Torres, former US Congressman representing California, included a photo from the CSRC. The CSRC holds the Esteban E. Torres Papers in its archive.
Pasadena Star News, January 26, 2022 (PDF)
“Agustín Gurza, a Former Times Columnist and Influential Latin Music Critic, Dies at 73”
An obituary for CSRC staff member Agustín Gurza, writer and editor of the blog for the Strachwitz Frontera Collection of Mexican and Mexican American Recordings. Chon Noriega, former CSRC director, was quoted in the story.
Los Angeles Times, January 14, 2022 (PDF)
“UCR ARTS Awarded National Endowment for the Arts Grant"
UC Riverside News reported UCR ARTS received a $50,000 Grants for Arts Projects award to support the forthcoming exhibition Christina Fernandez: Multiple Exposures at the California Museum of Photography at UC Riverside. Chon Noriega, former CSRC director, is serving as curatorial advisor for the exhibition. The exhibition catalog will be published by CSRC Press in fall 2022.
UC Riverside News, January 11, 2022 (PDF)
“Latinx Art Got More Visibility Than Ever in 2021. What Will Change Going Forward?”
A feature in ARTnews included discussion of the traveling exhibition Laura Aguilar: Show and Tell, organized by the CSRC in partnership with the Vincent Price Art Museum, and numerous Latinx artists who have been featured in CSRC exhibitions and publications.
ARTnews, December 30, 2021 (PDF)
“2021 Reflections: In an Amazing Year of Achievements, Nothing Topped the Return to Campus”
UCLA Newsroom summarized key achievements within the UCLA community during 2021, including the announcement that UCLA will build infrastructure to support achieving the designation of Hispanic Serving Institution by 2025. The story notes that the CSRC will play a key role in these efforts to support future Latinx Bruins. The roundup also included stories on the CSRC-led research project Critical Mission Studies, which focuses on the racial history of California’s missions during Spanish colonization and beyond, and Archiving the Age of Mass Incarceration, a collaborative project of UCLA’s four ethnic studies research centers.
UCLA Newsroom, December 16, 2021 (PDF)
To subscribe to the CSRC Newsletter, visit https://www.chicano.ucla.edu/subscribe
The UCLA Chicano Studies Research Center acknowledges the Gabrielino/Tongva peoples as the traditional land caretakers of Tovaangar (the Los Angeles basin and So. Channel Islands). As a land grant institution, we pay our respects to the Honuukvetam (Ancestors), ‘Ahiihirom (Elders) and ‘Eyoohiinkem (our relatives/relations) past, present and emerging.