Commentary: "They Are Americans"

By Chon A. Noriega, CSRC director and professor of film and television

A commentary on President Trump’s decision to end DACA. 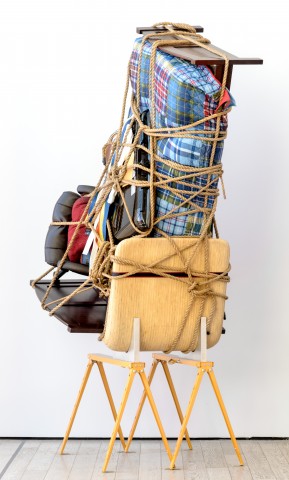 Last Tuesday morning, President Donald Trump announced his decision to end the Deferred Action for Childhood Arrivals (DACA) program that protected over 750,000 people brought to the U.S. illegally as children. These are people for whom the United States is where they were raised, educated, and socialized—as Americans. It is their home.

While the press has focused on Trump’s action as a new or incipient one—with a six-month grace period before it is enacted—it is important to note that the first DACA status person was actually deported seven months ago, in February: Juan Manuel Montes, a twenty-three-year-old who had lived in the United States since the age of nine.

If you want to get a visceral sense of what is at stake here, Montes’s belongings from his home are currently on view as part of a large-scale exhibition on the concept of home at the Los Angeles County Museum of Art. Organized by the UCLA Chicano Studies Research Center, Home—So Different, So Appealing is primarily a historical investigation of how Latino and Latin American artists working since 1957 have grappled with the role of the American Dream in defining “home” across the Americas. But the first piece one sees before entering the galleries is very much of the moment: “Temporary Storage: The Belongings of Juan Manuel Montes” (2017) by Southern California-based artist Camilo Ontiveros.

This work features Montes’s personal possessions from the home he shared with his mother and brother: a twin bed, bedding, TV monitor, books, boxing gloves, and mirror, among other household items. These objects are tied together with ropes and perched atop two sawhorses. The precariousness of the twelve-foot-tall structure evokes the bundled household furniture and appliances often seen atop pickup truck beds heading from California to Mexico. As with many of the artists in Home, Ontiveros is not offering a symbol or metaphor: these are the actual objects that made up Montes’s home. Their presence in the museum is first and foremost a sign of his current state of homelessness, of the fact that he is not here where he belongs. They are indexes of the instability of the lives of immigrants in the U.S. since the 1980s.

The American Dream has always associated the home with the nation, and both home and nation with immigration. In 1922, noted English writer G. K. Chesterton referred to the United States as unique in the world for being “a home for the homeless.”  “In a word,” he explained, “what is unique is not America, but what is called Americanisation. [It] is making a home out of vagabonds and a nation out of exiles.” In 1959, then-Senator John F. Kennedy codified this history in his book A Nation of Immigrants. Chesterton and Kennedy referenced primarily European immigration, but the vision they outlined was in principle available to all people, as we all “are created equal [and] are endowed … with certain unalienable Rights.”

President Trump’s action points in the other direction: He is making homeless those for whom the United States is the only country that they call home. Today’s immigrants are predominantly non-European and non-white: Latino (45%), Asian (27%), and Black (9%) (source).  Among the DACA-eligible population, two-thirds are from Mexico, followed by about 13% from Central American countries and South Korea (source).

There have been calls for Congress to protect DACA—including, perversely, from Trump himself at the same time he rescinded the program. That is at best wishful thinking. Instead, we must acknowledge that the Trump Administration’s “act of pure cruelty”—as the Los Angeles Times called it—has everything to do with race, and nothing to do with the principles that have defined our nation. As the University of California argued in a lawsuit filed last Friday in federal court, the rescission of DACA is “unconstitutional, unjust, and unlawful.” The lawsuit describes the DACA “Dreamers” simply as such: “They are Americans.”

Home—So Different, So Appealing is on view through October 15 at the Los Angeles County Museum of Art. It will travel to the Museum of Fine Arts, Houston, November 17, 2017- January 21, 2018. California and Texas are the states with the greatest number of approved DACA applicants. The exhibition is co-curated by Noriega, Mari Carmen Ramírez, and Pilar Tompkins Rivas.

See also: Carolina Miranda, "How artist Camilo Ontiveros acquired the belongings of a DACA deportee and what he did with them," Los Angeles Times, September 15, 2017.