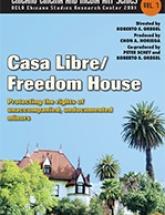 Casa Libre/Freedom House is a documentary about the Los Angeles–based organization Casa Libre/Freedom House and its efforts to assist unaccompanied and undocumented immigrant minors in Los Angeles. Many of these youth leave their countries of origin for desperate reasons, including abuse, abandonment, and severe poverty. Arriving in Los Angeles alone, they remain invisible. This film presents the remarkable life stories of several young immigrants who find shelter and community at Casa Libre. Casa Libre is a model program that gives them the opportunity to learn valuable skills, pursue their education, and obtain legal protection.

Roberto S. Oregel is a recent graduate from the MFA film production and directing program at UCLA. His films include Downtown L.A. (2002), Gronk’s Tormenta (2002), Racing Thoughts (2003), and Dominance and Terror: A Discussion with Noam Chomsky (2004).

Chon A. Noriega is director of the UCLA Chicano Studies Research Center and a professor of cinema and media studies at UCLA. He is the producer of Revelaciones/Revelations: Hispanic Art of Evanescence (1994).

Peter Schey is president and executive director of the Center for Human Rights and Constitutional Law, Inc., and founder and director of Safe Haven and Casa Libre/Freedom House.