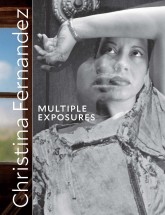 Christina Fernandez, a Los Angeles–based artist who has spent over three decades conducting rich explorations of migration, labor, gender, her Mexican American identity, and the capacities of photography itself. Featuring essays by art historians and scholars of Latinx studies, as well as interviews with the artist, this catalog surveys the development of Fernandez’s work from the late 1980s to the present, exploring her photography in terms of its social, historical, and art historical contexts.

A copublication of the California Museum of Photography at UCR ARTS, part of the University of California, Riverside, and the UCLA Chicano Studies Research Center Press.