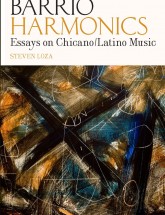 This collection explores Chicano, Mexican, and Cuban musical forms and styles and their transformation in the United States. Employing musical, historical, and sociocultural analyses, Loza addresses issues such as marginality, identity, intercultural conflict and aesthetics, reinterpretation, postnationalism, and mestizaje-the mixing of race and culture-in the production and reception of Chicano/Latino music.

Barrio Harmonics opens with a comprehensive overview that begins with music in the US Southwest in the seventeenth century and ends with the Grammy Awards for Latin American music in the first decade of the twenty-first century. In the following chapters, Loza discusses artists whose music ranges from sones, rancheros, and corridos to Latin jazz, R and B, and rock and roll. Among those he considers in depth are Pancho Sánchez, Lalo Guerrero, Tito Puente, and Los Lobos. He also surveys the contributions of scores of other individuals and groups who have shaped the current contour of Chicano/Latino music. Other topics include the music industry and the impact of globalization, the African diaspora, and Latin American music in Japan. In addition, Loza offers a candid assessment of intellectual capitalism and the void of nonwestern voices in contemporary scholarship.

Steven Loza is a professor of ethnomusicology at UCLA. His publications include Barrio Rhythm: Mexican American Music in Los Angeles and Tito Puente and the Making of Latin Music. He is also the editor of Religion as Art: Guadalupe, Orishas, and Sufi. Loza has been active as a performer and composer and as a producer of major concerts and festivals at UCLA and in Mexico City.